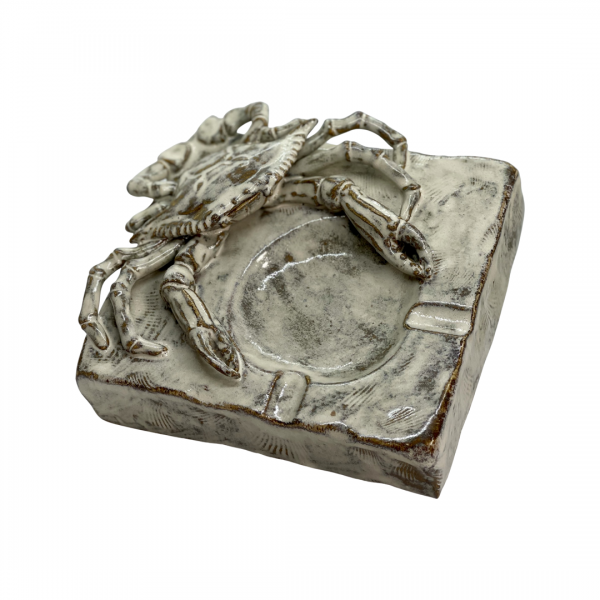 In stock (can be backordered)

This is one-of-a-kind in Antique White

Also available in Mediterranean White and in an Octopus motif.

Each individual piece is completely hand made from start to finish. The colorway is all neutrals consisting of subtle Iron Browns with crisp Antique White.

It is an all handmade line of stoneware pottery. Shayne Greco’s substantial ceramic vessels are decorated with flowing sculptures of land and sea dwelling creatures. Each individual piece is completely hand made from start to finish. The colorway is all neutrals consisting of subtle Iron Browns with crisp Mediterranean White.

The glaze used on all the work is lead-free. Each piece is “Stained” (a process in which some of the glaze is wiped off before the second kiln firing). Shayne Greco ceramics began in 2010.

Shayne Greco hails from New Jersey and currently lives on the Southeast coast of North Carolina.  He was well-taught at Savannah College of Art and Design in early 2000.  Shayne Greco Ceramics was established in 2013 after many years of working independently as an artist.  Much of his work reflects the distinctive attributes of the ocean.  “My pieces are designed to make a statement.  They are great conversation starters.”  Since the founding of the company and the popularity of Greco’s marine life creations, he has become an advocate for the conservation of our world’s oceans.  “I was unaware and largely ignorant to the damage that we, as human beings, are doing to our oceans.  While researching for the expansion of my nautical pottery line, I was shocked to learn that there were literally floating islands of plastic waste.”  Greco started to make subtle changes personally and professionally by reducing his use of plastics and waste.  “I wanted to make sure my company wasn’t playing a part in this pandemic, so I spent a great deal of time making sure the materials used and the waste produced were inoffensive and safe. I started to look at clay as the opposite of plastic.”  Greco uses a sculptural clay that consists of decomposed granite rock.  The glazes used are non-toxic and sculpting tools are non-plastic.  In addition, Shayne Greco Ceramics donates to a local sea turtle conservatory and is a member of The North Carolina Coastal Federation.  Through the popularity of Shayne Greco’s creations, a dialogue can be shared not only about the art, but also about protecting the marine environment.