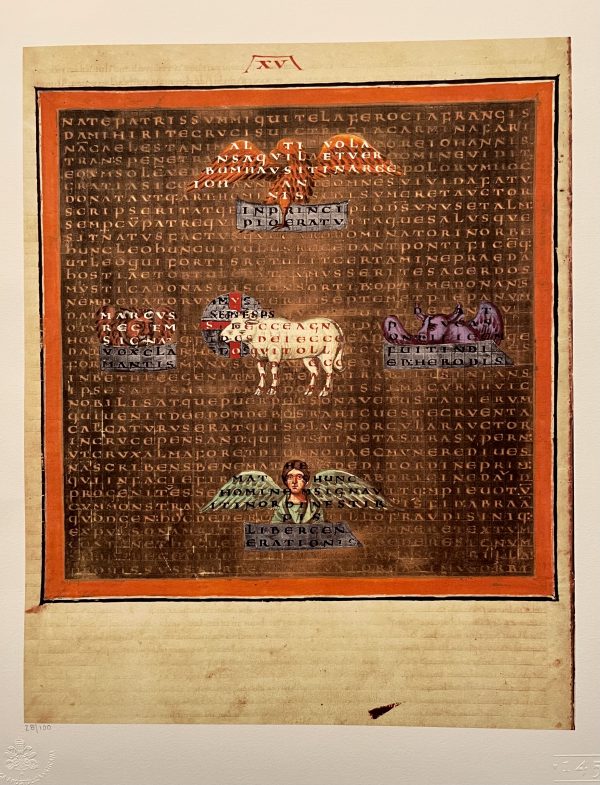 Frankish Benedictine monk, Hrabanus Maurus, wrote De laudibus sanctae crucis, a collection of 28 encrypted religious poems in praise of the holy cross. Arranged in the carmina figurata style of word pictures, in which shapes appropriate to the textual context are created by the outlines of letters, phrases or verses of poetry, these became much-admired and often copied.

Blind embossed with the seal of the Circa Publishing!

These are no longer being made. These are the last two.

Hrabanus Maurus, a ninth century monk from Fulda, Germany, studied religion, philosophy, and mathematics. Regarded for his generosity toward the poor, he fed over 300 people a day during the famines of 850 AD. Hrabanus Maurus is best known for his hymns and homilies, some of which are still used today. In fact, as testament to Maurus’ lasting influence, Gustav Mahler interpreted one of his poems in his moving 8th symphony. However, Maurus’ most notable achievement was De Laudibus sanctae crucis, (In Praise of the Cross) a collection of twenty-eight encrypted religious poems, rendered before 814 AD. He was said to be the inventor of a cyphering system of 36 lines containing 36 letters evenly spaced on a grid. In this grid, Maurus included figurative images: the crucified Christ, cherubim and seraphim, evangelist symbols, and even a dedication to King Louis the Pious. The poem filling the cypher grid was enriched by these smaller images, as most of the letters contained within them created tiny, individual poems.

Much like earlier works in the genre, Hrabanus Maurus’ poems were conceived in visual terms. Given that a large part of the population at the time was not only poor, but illiterate, the poems bridged the gap between a privileged reading community and the common person. Maurus used simple symbols: rings to signify cycles, squares to represent books, and letters for days. By doing so he made religious concepts easily accessible to the masses. This does not indicate that his poems were overly simplistic or didactic. Rather, they were made richer by the dichotomy of the complex cyphering used to both create and read the poems, and the viewer’s simple delight of instantly understanding sacred symbols. In praise of Hrabanus’ efforts to communicate religious ideas in ways that were both beautiful and memorable, Odilo of Cluny said in the 11th century of Maurus’ poems that “no work more precious to see, more pleasing to read, sweeter to remember, more laborious to write can or could ever be found.”