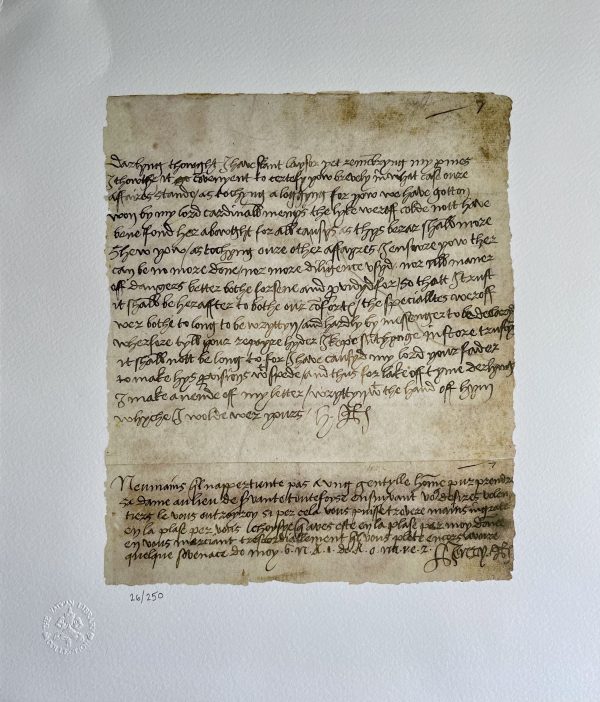 Limited Edition of 250, numbered 26/250. Comes with a certificate of authenticity.

Darling, these shall be only to advertise you that this bearer and his fellow be dispatched with as many things to compass our matter, and to bring it to pass as our wits could imagine or devise; which brought to pass, as I trust, by their diligence, it shall be shortly, you and I shall have our desired end, which should be more to my hearts ease, and more quietness to my mind, than any other thing in the world ; as, with God’s grace, shortly I trust shall be proved, but not so soon as I would it were; yet I will ensure you that there shall be no time lost that may be won, and further cannot be done; for ultra posse non est esse (One can’t do more than is possible). Keep him not too long with you, but desire him, for your sake, to make the more speed; for the sooner we shall have word from him, the sooner shall our matter come to pass. And thus upon trust of your short repair to London, I make an end of my letter, my own sweet heart.

Written with the hand of him which desireth as much to be yours as you do to have him.

King Henry VIII wrote this letter to Anne Boleyn to reassure her that they would soon be together. It is one of several in the Vatican Library archives.

The royal court had thought that Anne Boleyn had bewitched Henry…and perhaps she had. Even while married to Catherine of Aragon, his deceased brother’s wife, he became Anne’s relentless suitor. Determined to make her his mistress, he thwarted other suitors and sabotaged an arranged marriage. Anne resisted his advances, which fueled his desire.

When Rome refused to annul his marriage to Catherine, Henry severed England’s relationship with the Vatican, acquired a divorce from the Archbishop of Canterbury, and secretly married Anne. Soon after Henry declared himself the “Defender of the Faith” and crowned Anne as queen. Nine months later Anne gave birth to Elizabeth I, but Henry wanted a son, not a daughter to succeed him. At last, Anne delivered a son, but it was stillborn and Henry’s passion turned to Anne’s Lady in Waiting, Jane Seymour.

It all ended badly: Henry locked Anne in the Tower of London, for alleged adultery with her brother, three courtiers, and a musician. All were executed. Anne pleaded for mercy, but the King granted Anne only one request: That she be beheaded by the French sword, not an English ax, “My neck,” she cried, “is so small.” The day after Anne’s execution, Henry announced his engagement to Jane.