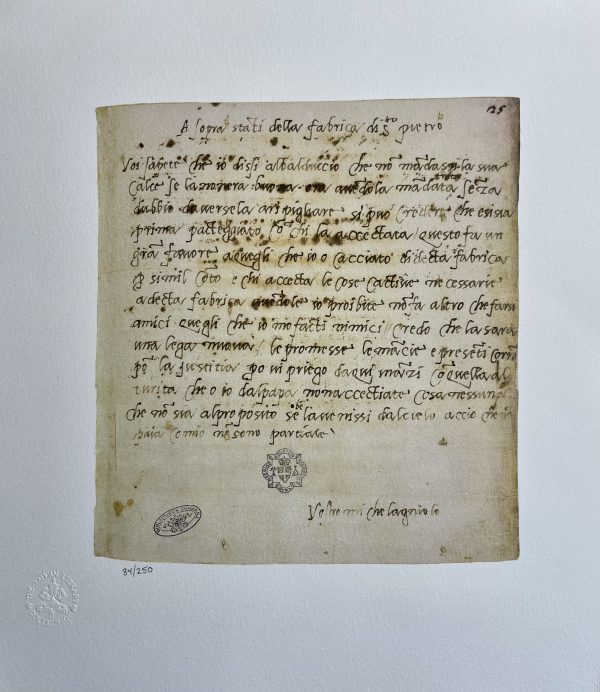 Michelangelo Buonarroti, Letter on the Work at St. Peter’s

Limited Edition of 250, numbered 34/250. Comes with a certificate of authenticity.

“To the superintendents of Fabrica di San Pietro

As you know, I asked Balduccio (Iacopo Balduccio) not to send his lime if it was not of excellent quality. Now, since he has sent bad quality lime, he should certainly come and take it back. It is easy to see that he had previously made an agreement with whoever accepted it; this person does great favors for those who I have already sent away from the site, telling them not to come back, and he does nothing but befriend those who are my enemies. I am of the opinion that they are all in league.

Promises, gratuities, and gifts prevent the course of justice thus, with the authority which the Pope has bestowed on me, I implore you from now onwards not to accept anything which does not serve our purposes, even if it come from Heaven itself so that I should not appear – – as indeed I am not – – in any way partial.”

Michelangelo was appointed in December of 1546 by Pope Paul III, replacing architect Antonio da Sangallo, who had died earlier that same year. He knew that by accepting this commission he was following the work of previous architects whose work might conflict with his vision for St. Peter’s. Yet the Pope was persuasive and a great admirer, and ultimately Michelangelo considered the commission to have been made by God himself. Believing this he refused compensation in exchange for the Pope’s promise of complete freedom to make all creative and structural decisions.

Because Michelangelo respected the design work of the architect Donato Bramante, and not Sangallo, he dismissed all of Sangallo’s workers in an attempt to restore Bramante’s original cross-shaped plan.

Although Michelangelo was aged and in frail health, he was often carried to the site for observation. He felt the need to preserve the honesty and integrity of his creativity while completing his vision of the Dome of St. Peter’s.