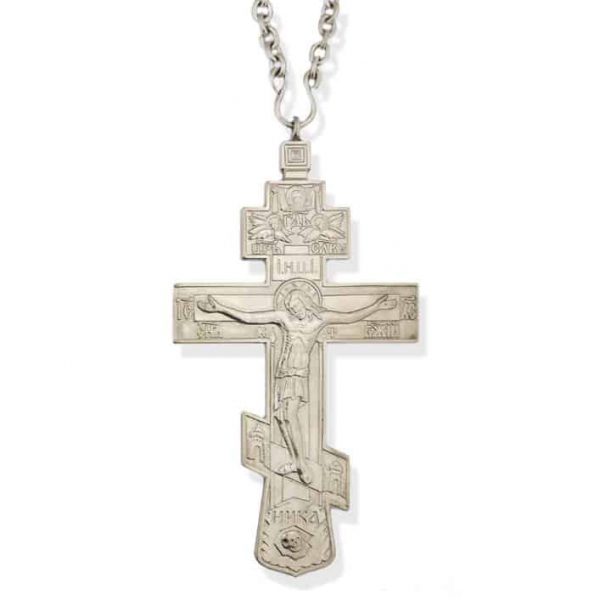 SKU: RL-1. Category: Jewelry Tags: Byzantine, Christ, Church Supply, Cross, Crucifix, History, Icon, Jewelry, Necklace, Old World, Religious, Russia, Sterling Silver
Share:
Replica of Award Given by Tsar Nicholas II
The Cross Is Made of Silver Plated “German Silver” Which is Also Commonly Referred to As “Melhior.”
The cross is 4-3/4″ x 2-1/4″. The chain is included. The chain is very beautiful as well. Silver plated with intricate designs on each link. The chain is about 25-3/4″ long and fully adjustable. This Cross was made by the Patriarch’s Workshops in Sofrino, Russia.
Very beautiful replica of the cross given as an award to priests by the Tsar Martyr Nicholas II Romanov. Cross is silver plated and upon the back is the inscription of award and the insignia and symbol of Nicholas II.

In Russian practice, the back of a priest’s cross is usually inscribed with St. Paul’s words to St. Timothy: “Be an example to the believers in speech and conduct, in love, in faith, in purity” (1 Tim. 4:12). Pectoral crosses are awarded in several degrees (particularly in the Slavic tradition):

In the Russian tradition, the Silver Cross is awarded to all priests by their bishop on the day of their ordination. This tradition began with the last Tsar, Nicholas II, who awarded a silver cross to every priest in the Russian Empire. Even after the fall of the Romanov dynasty, the practice of awarding the Silver Cross to Russian priests at their ordination has continued. On the Orthodox crucifix the body of Christ is not in full three-dimensional form, but in no more than three-quarter relief. It also bears the inscription INBI (the title that Pontius Pilate placed above the head of Jesus at the crucifixion) and the letters IC XC NIKA (meaning Jesus Christ Conquers) around the four arms of the cross.

This would make a beautiful gift for a lover of Russian or Eastern European art, religion, history, as well as a worthy gift for a priest. Made in Russia. Read more