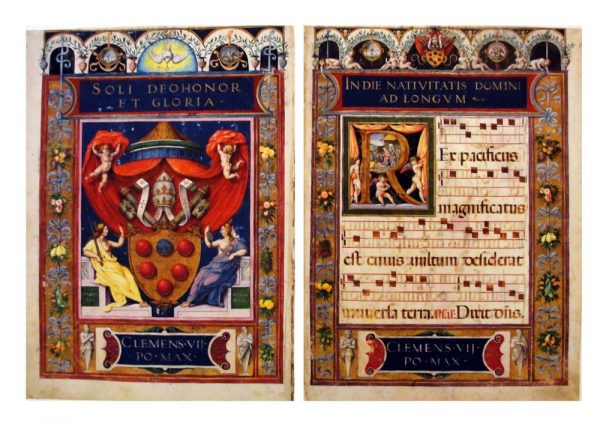 Limited Edition of 350, numbered. Comes with a certificate of authenticity.

These are no longer being made. We have two left.

Music flourished during the Renaissance, and was one of the most important elements of the Church as well as a highlight of Roman artistic and religious life. The singers and composers of the papacy appeared daily at the Vatican Palace and on special occasions at the Sistine Chapel.

This elegant antiphoner, circa 1530, was illustrated by Vincent Raymond and originally written by Vincent Raymond and originally written by Aloysios and Galeazzo during the reign of Clement VII, a Medici who commissioned the finest of art. On the left-hand page it showcases Clement’s Papal Crown and Keys against the Medici family crest. The right image features a Gregorian chant, Chant for Christmas Day, with beautifully illuminated initial “R”—the beginning of the phrase ‘Rex pacificus’. An exquisite miniature showing the Nativity scene surrounded by attending and loving cherubs.

Vincent Raymond was one of the most important illuminators at the papal court during the 1500s, and the only one who was given an official status. He was probably born in Lodève in Languedoc (France), but by 1535 he was working in Rome. He is the only illuminator to be mentioned in Vatican records from 1535 to 1549, the year he was named papal illuminator by Paul III (the only illuminator ever to have held this post). His other patrons included Leo X and Clement VII. Raymond’s art has close connections with the most famous and fashionable Roman painting in large scale of the period, especially that of Michelangelo.